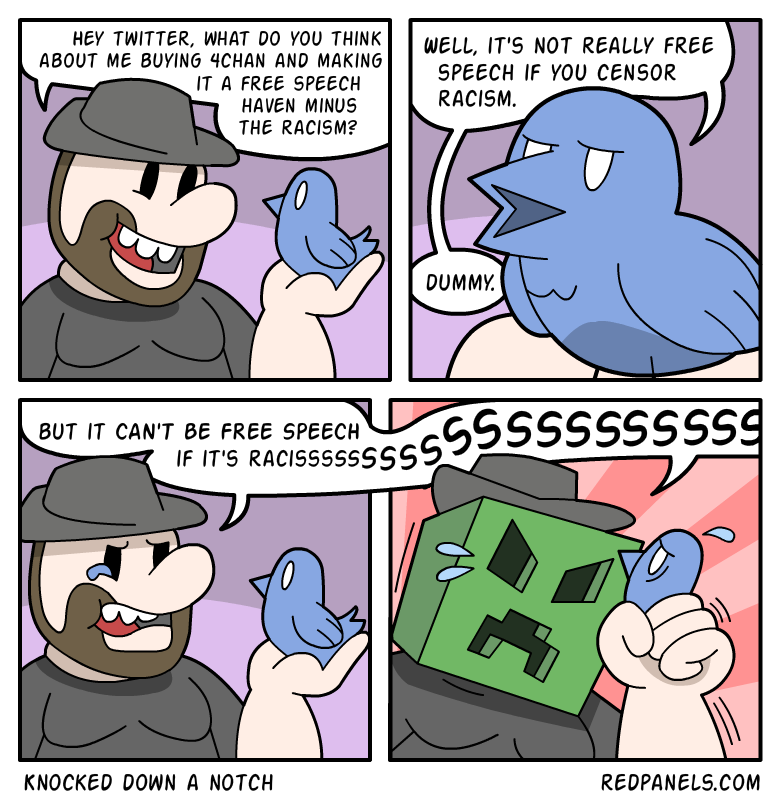 2016-10-04
In reference to the meltdown Minecraft creator, Markus Persson (aka @notch), had on Twitter. He concluded by deleteing all of his previous tweets, but not before wishing his followers "burn in hell".

The excitement began when Notch suggested he'd buy the declining discussion board known as 4chan. He claimed he would make it a "free speech heaven"[sic] but also somehow scrub it of racist jokes. Twitter users, including myself, called him out on his hypocrisy.

After blocking users, and responding to others with increasingly saltier and saltier tweets, he shared some bizarre interpretations of free speech before finally just flipping the finger to his followers.

Following this tirade, he shared some cryptic messages before wiping his entire tweet history. He wrapped up his then barren twitter account with another cryptic profile message.

I took a brief moment to update my profile accordingly. Soon after, Notch returned to Twitter again to congratulate his detractors and type out the most cringe-inducing tweet chain I have ever read in my entire life.

All in all, I find the story of Notch to be inspiring. He is living proof you can earn a billion dollars without ever needing to become an emotionally mature adult.