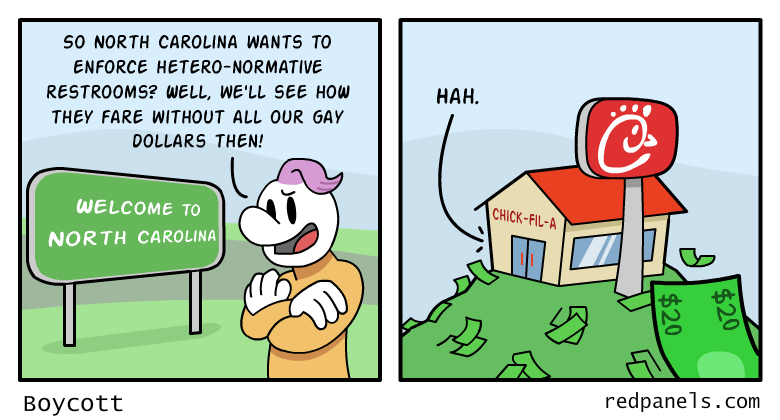 2016-05-01
Recently the American gay community has been in uproar about a law passed in North Carolina that, among other things, requires gender-specific restrooms to be used in accordance with one's biological sex. Additionally, it prohibits local governments from enacting requirements on private business that would further constrain their ability to discriminate on hiring decisions for attributes not already protected at the state level. To put it simply, the law enables employers to filter applicants by things like their sexual orientation, but not for something like their race. Some people have defended the bill saying it protects their religious freedoms, others assert that it affirms that private individuals have the freedom to associate (and dis-associate), while others insist, predictably, that this bill represents hatred.

This controversy resembles a similar boycott by the gay community of a Christian religiously-affiliated fast food chain, Chick-Fil-A. Controversy arose in 2012 when is was discovered that the company had donated to groups in opposition to gay marriage. In response, gay activists mounted an vigorous boycott of the company, which was already very public about it's Christian image, to hurt its business. it would later be reported that their boycott was not as successful as they thought it was going to be - the publicity had increased sales with it's core customer base:

"Chick-fil-A's sales soared 12 percent, to $4.6 billion, in 2012. The good fortune follows several years of impressive expansion and strong sales, which have pushed the privately held company's valuation north of $4.5 billion, making billionaires out of its founders ... These latest sales data are just further proof that all that negative coverage didn't hurt demand for chicken sandwiches among Chick-fil-A's core consumers." Source.

While Chick-Fil-A would later lessen it's emphasis against gay marriage, the business retains it's public Christian image. The retention of it's culture would serve it well. Today the restaurant chain "generates more revenue per restaurant than any other fast food chain in the US". Who knew that serving your core customer base would work better than pandering to bitter outsiders?

Having written the above, I was reminded of another famous gay boycott. An Indiana pizzeria drew the ire of the gay community for stating that it would decline to cater to a gay wedding, despite affirming that it would never turn away a gay customer in-store. Not being content with merely not purchasing any pizza, the local queer activist community threatened violence against the store and forced it (at least temporarily) to close. In turn, sympathetic supporters ended up raising nearly one million dollars for the owners of the pizzeria in support of their stance.

It would seem that in a battle of wills, the principled man wins.